Malta: The Islands of Gozo and Comino

A whole new world exists outside the main island of Malta. Here are my adventures from the islands of Gozo and Comino, in the middle of February, when there’s barely anyone else visiting, and where history goes back thousands of years.

Wandering through a village to a hole-in-the-wall bakery with curious hens staring at me, the hourly bus breaking the stillness of the roads, ancient temples creating a portal into a bygone era, and family-run salt pans keeping a generations-old tradition alive. Hardly seems the Malta of beaches packed with people prolonging their holiday tan. This is the Maltese Island of Gozo. While certain parts of Malta’s main island can feel like a sprawling city with traffic, continuous construction and crowded public transport, the tentacles of urbanisation seem to have allowed Gozo to remain at peace. For now. Outside the sleepy village-like capital, Victoria (also known as Rabat), the rest of the island is a time-warp where everything moves at a deliciously slow pace, the sea visible from almost anywhere.

How different can Gozo be from the main island?

Apparently it’s not just the pace of life and lack of urbanisation that makes Gozo different. Scarred perhaps by numerous (sometimes harsh) rulers who’ve tried to control Gozo from the Romans and Phoenicians, to the Arabs, French and British and by tormenting pirates and pillaging marauders over several centuries, the Gozitans are a more reserved bunch. I was told that calling someone from Gozo a Gozitan rather than Maltese means the world to them. They’re aware that many people may struggle to locate Malta, let alone Gozo – so won’t go into depth about their island when faced with foreigners. But they’re incredibly proud of Gozo and even speak their own dialect, apparently a more ancient form of Maltese.

If Gozo was an organism, its arteries are all the roads leading to a central point – its beating heart; the Citadel of Victoria. Rising steeply from the ground, it is recognisable from almost anywhere on the island and goes back thousands of years. If its walls could speak the painful stories of the past, I’m sure they would fill bookshelves in several libraries. Protecting against many foreign attacks, the Citadel has provided refuge to the local population who were at various points required to stay here each night to be safe. The darkest moments came in the 17th century when corsairs (sea bandits) harassed Gozo followed by an Ottoman attack culminating in the vast majority of islanders being taken into slavery. Unsurprisingly, as things calmed down, the island’s biggest settlement formed at the foot of the citadel – the capital of Victoria.

Today, the Citadel is a reminder of the turbulent and painful past that this quiet island has been through. While strolling around the ancient Citadel will take you past the Law Courts or the baroque Gozo Cathedral, I think its magic is far more simple. Just standing there at sunset is a bewitching experience. You see the sea in all directions while the evening sky floods the landscape with different shades of golden orange.

Traditions from Gozo’s deep and layered past still live on, and I was witness to one of them in Masalforn. And no, this isn’t diving – it’s the labour-intensive task of salt production dating back to the time of the Romans.
I met Josephine, who’s now taken over as the fifth generation of her family to run these salt pans. I would have never guessed they were laboriously carved by hand, cutting the soft limestone rock into a grid-like formation. While the trade was more widespread in Phoenician and Roman times, it is just her family and two others that run the main salt pans now, producing artisanal salt for sale in Gozo.

“A typical harvest could be about 10 tonnes, and usually happens between May-August. In summer, we use a motor pump to fill the main (big) pools with salt water. The hot sun causes evaporation and the salinity of the water to increase. We spread this concentrated salt water into smaller pools, where it evaporates even faster and forms small salt mounds. It’s then scraped by brush into a larger mound that’s harvested by hand,” she explained. Each cycle typically takes a week, and then is repeated. Almost the entire process is lovingly and painstakingly done by hand (aside from the motorised pumps that help with the initial filling of pools).

Josephine recommended I continue walking a few more kilometres along the coast, saying that I’d be in for a treat. I’m glad I changed plans and followed her advice. You pass incredible cliffs and disused salt pans; panoramas I’d never seen before. Conveniently, there’s a village nearby to hop on a bus back to the capital, Victoria.

The oldest freestanding structures in the world: Ggantija Temples

Ever thought you’d come face to face with structures older that the Pyramids and Stonehenge? Say hello to the Ggantija Temples on Gozo – the world’s oldest freestanding structures. It’s the closest you’ll come to a time capsule taking you back 5500 years ago.

Excavations in the 19th century uncovered these two Neolithic stone temples that were apparently focal places for ancient rituals. The Maltese believe they were built by legendary giants – capable of lifting rocks that weigh well over 50 tonnes. While little remains of the full structure (5500 years is a true test of time), it’s likely that the large forecourt was used for ceremonial gatherings, with animal sacrifice being part of the rituals. But for whatever reason, the temple period in Malta came to a rather abrupt end in 2500 BC. From what I understood, people aren’t really sure why.

#AdminTip: There’s a €10 entrance fee to see the temples

When my host realised I was visiting Gozo, he rummaged for a notepad and wrote one cryptic word – Maxokk. “Go to the village of Nadur when you get to Gozo, and find this little bakery. They make a fantastic ftira (a Gozitan traditional dish resembling a pizza) – you won’t regret it,”  he said as I reverentially tucked away the piece of paper into my wallet.

Surely enough, Maxokk was my first destination after I arrived on the island. After some winding side streets led me to a group of inquisitive hens perched on a wall, I found Maxokk. Unable to choose between the various ftira on the menu, I asked the family running the bakery for their recommendation. Made out of sourdough bread in a wood-fired oven, the ftira is topped with fresh, local products. I had the classic version: eggs, ġbejna (local sheep cheese) and potatoes (anchovies, capers, tomatoes and tuna are also popular). It was so filling it became my lunch, snack and dinner for the day.

#Info: They only accept cash; the classic ftira with ġbejna costs €7

I didn’t have time on this day trip to visit the imposing Azure Window (the famed arch in the sea has now collapsed) and the lagoon on Gozo’s western edge – I favoured visiting the salt pans instead. That’ll have to wait until next time!

How often do you come across an aquamarine beach paradise that was once not only the hiding grounds of pirates and sea bandits, but also an isolation zone for cholera victims and a hunting ground for wild boar and hares? Like all things Maltese, even a modestly dimensioned island is steeped in history going back many centuries.

While hordes of day trippers flock to its beaches in the height of summer, in winter it’s a hiker’s heaven. It was 12°C and windy, but I didn’t mind. When I arrived on the first boat, it felt like there was just three of us on the car-free, virtually uninhabited island (apart from one hotel and a few farmers, there’s barely anyone else).

The only place I’ve found where the idyllic waters that gloss the covers of Conde Nast Traveller have lived up to reality is the Maldives. Comino Island’s Blue Lagoon comes a close second. I can’t speak for summer when I’ve been warned the island heaves with tourists. But in winter when you arrive early morning and the sun is out – the waters sparkle a shade of blue I thought only existed in magazines. While the water’s brilliance is itself a treat, the real show-stealer is hiking to the top of the rocky outcrops. The reason? To feel like you’re levitating tens of metres above the sea.

If roaming around aimlessly on an uninhabited island is something you’ve always dreamt of doing, Comino is here to answer your prayers. Just be sure to bring everything you need for the day because there are no corner shops to buy essentials. Comino has no tarred roads (just dirt tracks), so in the middle of February it really can feel like you’re deserted here (the only hotel is more or less dormant). My inner geography geek got quite excited because I was walking through one of my GCSE Geography annotated diagrams of Mediterranean lowland scrub. Only this time, it wasn’t a diagram that I was walking through in my head to remember for an exam. It was real life.

While the Blue Lagoon is perhaps the most popular spot on the island, after crossing fields of wild herbs (the island is named after the Maltese for cumin that grows here), you can swap rocky outcrops for sandy beaches at Santa Marija Bay or find more secrets hidden among another gang of cliffs at the Crystal Lagoon.

Catch a bus (or two if you’re coming from outside the capital and need to change in Valletta) to the Cirkewwa Ferry Terminal at the western edge of the main island. It took me 2 hours to reach the ferry terminal from the opposite end of the island (Marsaskala). From here, wait for the next ferry. It usually runs every 45 mins, 24 hrs daily. Return tickets are €4.65 in winter and it transports cars as well. There’s free WiFi, a café, a sun-deck and a mini supermarket onboard! The crossing to Gozo normally takes about 30 mins.

Similar to Gozo, hop on a bus (or buses) to the Cirkewwa Ferry Terminal. Instead of going inside the terminal, follow signs for ‘Comino Ferries’ and catch one of the boats heading over (near the snack bar on the waterfront). In winter, Comino Ferries runs about once per hour (sometimes more often) with the first ferry out at 9:10AM and the last ferry leaving Comino at 4:00PM. This is all subject to change so double-check when you buy tickets (return tickets are €13). Despite Comino being virtually uninhabited, there are free bathrooms on the island, not to worry. 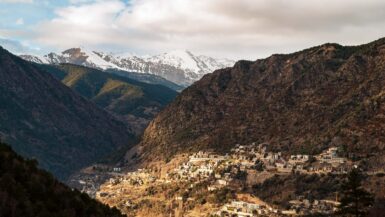