The atmosphere in Luang Prabang for the most part was that of one big sleepy village.  Having recently been in Bhutan, I loved this. Inhabited for thousands of years, it was the royal capital of the country until recently (1975). The whole town was designated a UNESCO World Heritage Site in 1995, and you really do feel like you’re walking through a museum of architectural, cultural and religious marvels as you wander through the city – a mix of traditional design, old temples and colonial buildings, all remarkably well-preserved.

I loved walking through the streets of LP, discovering temples like the Wat Sene around the corner, popping in and wandering through the temple grounds as daily Laotian life rumbled along at a glacial pace. While walking I discovered a charming restaurant in a beautiful colonial building, Tamarind, along the Nam Khan river bank. There I tried the steamed river fish, Mok Pa, wrapped in banana leaf and infused with lime leaves, lemongrass and chilli, followed by a classic Laotion dessert Khao Gam, made from sticky red rice cooked with coconut cream and tropical fruit. Upon cooking, the rice turns purple in colour and is served warm with banana, coconut shavings and tamarind. Delicious!

Walking along the river bank, I came across beautiful Laotian lanterns – a very tiny taste of what the town would look like later in the year come October, when it’s transformed in the Festival of Light, Lai Heua Fai. Said to be the most enchanting event of the year, this is when the city pays its respect through light and Buddhist tradition to the spirit of the river.

While exploring a night street food market, I came across another traditional dessert in Luang Prabang – Khao Nom Kok: small, sweet, bite-sized coconut pancakes. The pancake batter is cooked over hot charcoal in a cast iron pan with indents. I got half a dozen of them, wrapped in a banana leaf. They were so addictive that I ate all of them in one go. The crispy exterior and silky middle made them melt in my mouth.

The next day I went in search of the magical Kuang Si Falls, which is just outside town – the whole reason for me coming to Luang Prabang. According to local legend, they formed when a wise old man revealed the waters of the Nam Si by digging deep into the earth. After the water came, a beautiful golden deer made its home under a protruding rock. It is said that the falling of the water on this rock created an enchanting echo that drew people from as far away as China. The waterfall gets its name from this legend – ‘Kuang’ meaning deer and ‘Si’ meaning dig.

Back in Luang Prabang for the evening, I wandered down the busy thoroughfare in the old town – Sisavangvong Road. The road gets its name from King Sisavang Vong of Luang Prabang, who then became head of state of the Kingdom of Laos when it achieved its independence. Here you really see how the French influence still exists in terms of the old colonial architecture and food served by the street food vendors, like the crepe stall doing delicious banana & nutella crepes, and the sandwich stand doing freshly made chicken & avocado baguettes. The street transforms with lights at night, when a night market opens and you can buy hundreds of handmade Laotion creations, souvenirs, coffee and jewellery, with smoothies to keep the energy up.

One of the best vantage points in the city to watch the sunset is at Mount Phou Si, right in the middle of town – the highest point in Luang Prabang. You’ll pay a small fee just before you start an uphill journey involving 300 steps until a fabulous panorama unfolds when you reach the top. It’s a truly special sight as the sun sets over the quiet, sleepy town with the majestic Mekong river winding through it. Head there early because almost every tourist in the city has the same idea, and lots of people come early to secure a spot to sit and watch the sunset.

Luang Prabang is a city of many hidden wonders – one which has a mysterious soul, formed over the centuries. One of these wonders is the Pak Ou Caves – in a dramatic limestone cliff, where thousands of Buddha statues of all shapes, sizes and forms stand in the darkness on various shelves watching over the confluence of the Mekong and the Nam Ou rivers. It’s approximately an hour long journey (25 km) north of Luang Prabang in a traditional narrow, long riverboat. Try and get the first seat in the river boat, to have the best views of the stunning scenery as you cruise along the Mekong. Once you reach, you can venture up to the two caves (there is a lower and upper cave) and with a torch, begin to discover the wonders hidden inside. It’s a steep climb to the upper cave, but it’s less crowded, quieter and more untouched. On the way back to Luang Prabang, we stopped off at Ban Xang Hai Village (Whisky Village) where people brew the local, traditional whisky – lao lao (a white whisky). There’s delicious rice wine and for those that are slightly more adventurous, there’s also whisky fermented and mixed with snakes and insects!

Don’t miss some excellent coffee, Lao style. There are a number of very relaxed cafes across town doing very good coffee. I was particularly intrigued by the siphon brew, and wanted to see the mechanics of brewing in action – so I went to Saffron Coffee, on the banks of the Mekong. Saffron Coffee was established in 2006 to create a viable cash crop for the villagers in northern Laos who, since the early 2000s, were unable to rely on the outlawed opium harvest for their livelihood. It is these shade-grown Arabica beans that are used in their cafe in Luang Prabang which opened in 2016. It was a treat to watch the barista brewing the coffee using the vacuum coffee maker, which involved the water getting heated up and going into the upper chamber where the coffee grounds were stored and then coming back through the filter into the lower chamber once the brewing was complete. Made for a delicious coffee.

The whole serene, tranquil vibe of Luang Prabang is perhaps best encapsulated before dawn, when locals line up on the streets and sit on the pavement for Tak Bat, or the giving of alms. The Buddhist monks walk silently through the streets of Luang Prabang collecting their daily alms (Lao sticky rice) from the devotees who sit in silence with their heads bowed in a sign of respect, following from a Buddhist practice of making merit. As you sit there at 5am in the morning, before the first rays of the sun emerge, while the mist is still fading away, there’s a feeling of peace. Of calm. Of being immersed in a silent tradition that’s being going on for over 600 years, and hopefully will continue for several hundred more years to come.

I visited Laos in February 2018

10 things I learnt about Lithuania

Québec – a glimpse of French Canada 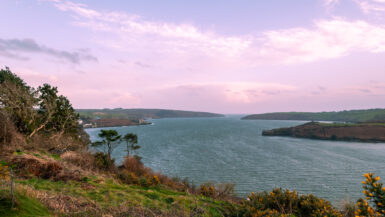 A weekend in Cork, Ireland